The refurbishing and the creation of the Cantine Ascheri Hotel have followed three distinct guidelines, which blended together have resulted into a single harmonious form 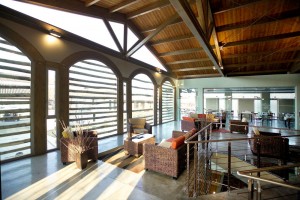 The whole complex is an example of minimalist art typical of the post-industrial reality of the old traditional tanneries which in the late 19th c. made of Bra a thriving, rich town.
Leather, used in a wide range of hues, is in fact one of the recurrent themes in the hotel furnishings, while cement is used in thousand different ways: bush-hammered in the hotel lobby, smoothed in the wide courtyard or at sight in the partitions, the beams and the bearing columns. Rusty iron beams, and grey wooden trusses and planking are reminiscent of this old world which now interacts with today’s hyper-technological aspect of the wine industry. 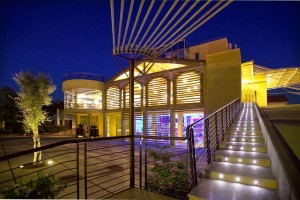 Another interplay then takes place between nature and rural tradition both visible in the mortar made up as in the past of limestone and soil. This mortar covers the building’s façade making it look like a hill slope eroded by water and laboured by man. The “brope”, the horizontal chestnut tree poles, which once created a colourful effect when matched with the yellow of maize and the lively colours of families’ laundries, here become unusual sun breakers, tied up by means of inox wire ropes outside large windows.

Finally, some natural elements “colonize” the built-up spaces: a highly symbolic cork-oak, grass coming out of the courtyard cement slits, a shady bower covered with wild vines just outside the Osteria Murivecchi and on the 1st floor hanging courtyard. The bower is clearly reminiscent of the local terraced hills covered with vineyards.
Vineyards that are here physically present in the form of soil brought from the wine holdings of the Ascheri family. This soil, pressed up between two crystal sheets, forms a fascinating partition between the courtyard and the bottle shop. 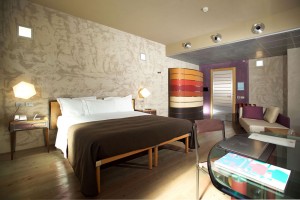 Though a contemporary pictorial and sculptural work, both the walls and the central column in the bottle ageing cellar conjure up visions of underground tunnels dug up in marl and sandy soils.
For someone the huge central pillar bearing the whole building looks like an imposing tree which demonstrates that the Ascheri family’s age-old roots are exactly there, in the deepest and darkest part of their ageless village.

Distance: 20’ from Cuneo airport and 60’ from Torino Caselle

SPA Gallery: design building in which you can enjoy exclusive services